Architecture is word that, to many, brings to mind staid stone facades, imposing Romanesque columns and stately rows of square glass and steel skyscrapers glaring in all their sun soaked glory on the skyline. But architecture can have a softer side – one that, while continuing to celebrate the achievements of the past, welcomes the visionary and the bold into the future of the discipline.

Such ideas are represented in the bold, flowing forms of architect Zaha Hadid, designer of the short-lived (by design) structure erected in Chicago’s Millennium Park in 2009. Celebrating the first city master plan by architect and planner Daniel Burnham, the structure was one of a pair (the other designed by celebrated architect Ben van Berkel) installed temporarily in the park, and lit by lighting designer Tracey Dear, owner of Dear Productions, using Iluminarc architectural fixtures.

With an internal skeleton comprised of an intricate, 7,000-piece aluminum structure, the sinuous shape was covered in an an elastic, translucent silvery-gray fabric with slits cut into the top to act as skylights, bathing the interior of the “space” with sunlight during the day. Hadid, the first woman in the world to win the Pritzker Architecture Prize, called this a “fluid form”. As the sun shone through the structure, the shadows projected by the slits recalled the lines conceived by Burnham for the Master Plan of Chicago. 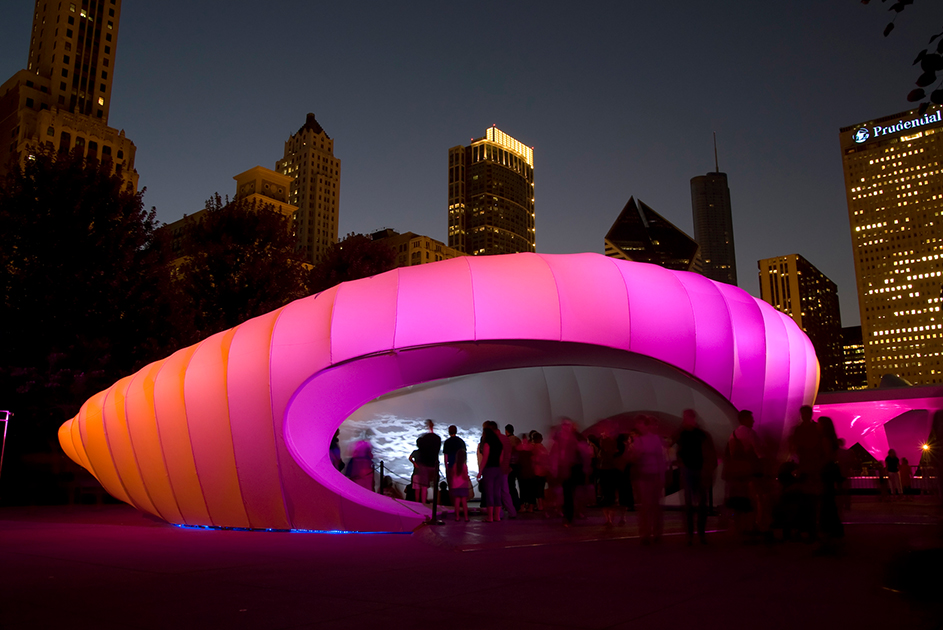 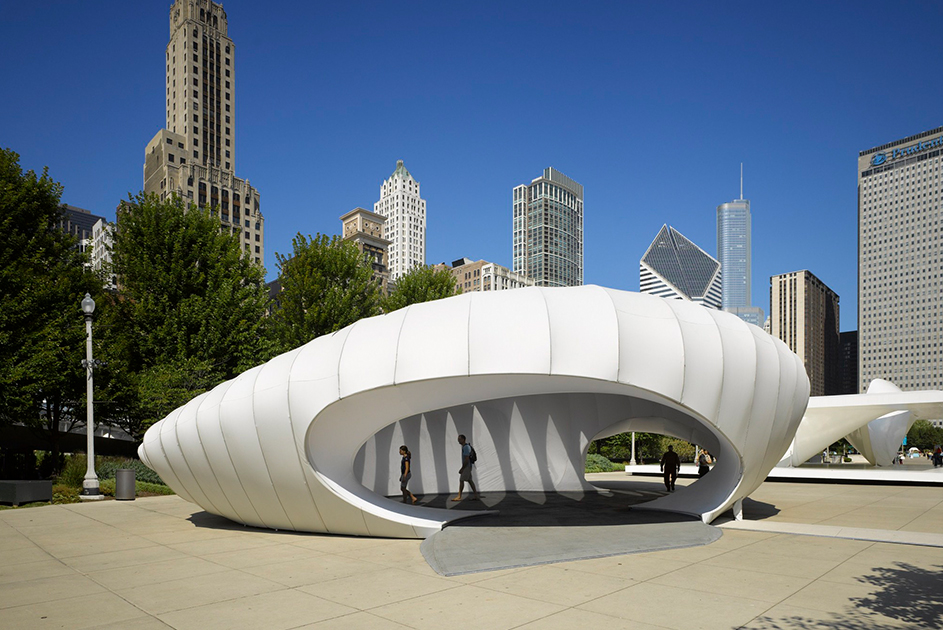 “It was our intent to make Hadid’s pavilion warm while van Berkel’s is more playful,” Dear said. Hadid’s fabric was very porous, “so it does soak up the color, whereas van Berkel’s pavilion has a reflective finish to bounce the light between the two surfaces” of the floor and roof, he added. While the other pavilion was to be lit with colors from the original master plan – faded earth tones in various shades of red and orange – the design of the Hadid Pavilion called for a far different approach.

“With Hadid, we wanted to use dark, saturated complementary colors for the inside and out and to make it more futuristic looking.” And indeed, using the Iluminarc fixtures, he was able to achieve that, painting the entire fabric colors in dramatic shades of grassy greens, deep crimson reds and brilliant purples. Inside the Hadid Pavilion, visitors were able to view a film that represented the past, present, and future of the city of Chicago, which was produced by London artist Thomas Gray, who attended the University of Illinois at Chicago.

Danial Burnham oversaw the construction and operation of the 1892 Chicago World’s Fair and is credited for preserving the Lake Michigan shoreline as a space open to the public. His vision of a network of parks, promenades, and walkways close to the water that replaced a patchwork of tent cities, warehouses, and wharves transformed the area.