The waters of Florida come in many forms. From the rushing waters of the Suwannee River to the big surf and beaches of the Atlantic and Gulf coasts, to the life-giving waters of the Hillsborough River that provide drinking water for Tampa, few things are as important to the state and cities as their various rivers and other bodies of water.

So too are the bridges of Tampa that provide access for commerce, pedestrians, and vehicles of every sort to cross the waters. As part of a 2021 project produced by the City of Tampa Art Programs and the Friends of Tampa Public Art, Tracey Dear of Chicago-based Dear Productions was invited to design permanent lighting for five landmark bridges over the downtown section of Hillsborough River, entitled “Agua Luces”, or “Water Lights”. Complementing the Tampa Riverwalk expansion, the designer specified rugged, outdoor-rated Iluminarc fixtures in his design, which allowed the colors of the bridges – the Platt Street Bridge, Brorein Street Bridge, Tampa-Hillsborough Expressway Authority overpass, Kennedy Boulevard Bridge, and the CSX Railroad Bridge – to change throughout the night, every night.

“The illumination of the five downtown bridges generated tremendously positive feedback from our citizens and abroad,” said Robin Nigh, manager for City of Tampa Art Programs Division. “During the Republican National Convention of 2012, the bridges were wonderful vistas seen around the globe. The incorporation of LED light into the landscape of downtown Tampa was a cost-saving decision, as well as an aesthetic one,” she added. “Our research indicates that the five bridges combined use the equivalent power of one house. Simply put, the technology is available to achieve beautiful, efficient lighting—we wouldn’t have done it otherwise.” 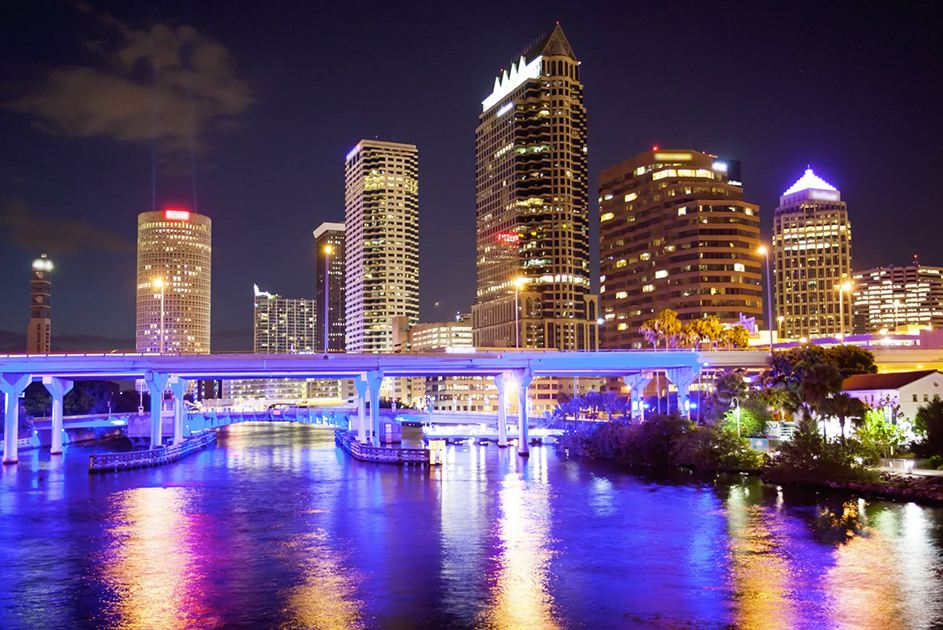 Four of the bridges use ninety Iluminarc fixtures, while the fifth – Tampa-Hillsborough Expressway Authority overpass – uses twenty, along with several Iluminarc linear wash lights. The lighting configuration allows for dramatic and unexpectedly beautiful light to cover the bridges, reflecting off the waters below and emphasizing the unique architecture of each bridge.

“Each bridge is unique, and I wanted to give them their own personality,” said Dear, “while unifying them as one family of bridges surrounding downtown Tampa. Much like currents of water, the bridges will constantly change color and appearance. This magic of changing light reflects in the Hillsborough River, adding to the overall view of the city.”

“The Agua Luces project by the City of Tampa has enhanced the entire waterfront along the Hillsborough River, as it runs through and around the downtown area, by providing a scenic, color changing scheme along one of the city’s great assets—the waterscape,” said Donald J. Skelton, P.E., District Seven Secretary, Florida Department of Transportation. “We are excited to work with the city to make this happen. Part of our mission is to support the efforts of municipalities while ensuring the continued safe operation of the transportation system.”

Joe Waggoner, executive director of the Tampa Hillsborough Expressway Authority, agreed. “The LED lights have enlivened the city’s landscape with the bonus of energy and maintenance savings. Additionally, our partnership with the City of Tampa helped us save construction costs and accelerate the schedule for implementation. Both THEA and our Board are happy with the result.”